Unit testing is a great software testing practice that gets a lot of love in web and application development but unfortunately isn't practiced as often in embedded/firmware development. This is a shame as the impacts of having a bug in firmware can be considerably more catastrophic than having a bug in a webapp. I've written this article in the hope of demonstrating some of the benefits that come when writing unit tests for embedded software and have also given a small toy example of how it's possible to unit test firmware using the cmocka framework.

There are a lot of unit testing frameworks for C but for embedded testing, the framework I like best is cmocka. I've looked at others in the past, such as cmock and cutest but cmocka stands out as having all testing & mocking functionality I need while having minimal dependencies.

On caveat worth mentioning is that to properly use these frameworks, you'll most likely need to compiler your code with a different compiler to what your compile with for your hardware - both so that the framework can run and so that you can execute the tests on your workstation. However, this shouldn't present a major problem as long as you're not relying on non-standard or undefined compiler behaviour. Logic errors in your code will still be logic errors no matter what compiler you use to compile the code.

An example of unit testing C in an embedded context

To give a concrete example of how you could make use of cmocka in an embedded context, I'll show the process of unit testing code for a temperature sensor. I've chosen the TI TMP101 as the temperature sensor, which is a temperature sensor that works over I2C. The complete listing of code is checked in on my github, the below text gives a rundown of how it all comes together.

The first step as normal, is to write some code for the tmp101 sensor that can fetch a temperature. You can find the full code listing on my github. It's also reproduced below.

This function isn't the most complicated function but there's enough bit manipulation to make me nervous and unsure if it'll do exactly what I want all the time. Sure, we could run it on my hardware platform and see how it responds but that'd only prove that it works as whatever temperature it is now. Instead, lets write some unit tests for this code.

Conveniently, for this particular temperature sensor, TI are kind enough to provide a table of example temperatures with their corresponding 12 bit digital outputs. These prove a nice place to start in testing our get_temperature function.

In essence, we want to control the data that i2c_read_blocking returns to our tmp101_get_temperature function so that we can check against our function works as it should. A simple (but somewhat ugly) way to this might be to have the function look something like:

But mixing test code with production code is ugly and an antipattern that should be avoided if possible. A much better way that allows us to both completely separate our testing and source code is to use the cmocka framework to help us (dynamically!) control what our i2c_read_blocking function does. The first step of using cmocka is to define mocks for the functions you want to mock out. The two mocked functions are shown below.

cmocka cleverly uses the linker to swap out the real function calls for the mocked ones. To allow for this, mocked out functions are prefixed with __wrap_. The linker is then provided with the arguments --wrap=i2c_read_blocking -Wl,--wrap=i2c_transmit_blocking which allows these functions to be mocked out. For a complete example of compiling/linking with cmocka, see the makefile in my example project.

With the mocks in place we can now write some tests! A complete look at the tests in my example project can be found on my github but, as an example, here's a single test:

The two calls to will_return set what the i2c_read_blocking function writes into the pData array. As per the datasheet, the 12 bit sample is returned over two bytes so these values correspond (from the above TI table) to -25 degrees celsius, which we check against. Much easier than having to stick the temperature sensor in the freezer!

Running all of the tests through a Makefile gives this cool print out: 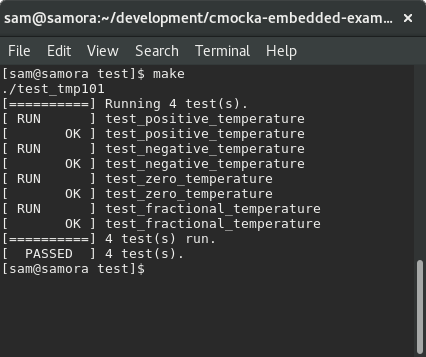 Although this is just a simple example, it hopefully demonstrates the utility that having unit tests can provide. Having a suite of unit tests for a project gives developers a lot of confidence - I find unit tests especially useful in developing application layer protocols on top of lower level protocols.

If you're interested in poking around a little at the source for this example, see how it's all linked together an run as a test or even run it yourself, all code for this is avaliable on my github with instructions of how to run.

I hope you found this article interesting, if you have any question please don't hesitate to let me know!