Getting started with the xv6 operating system

xv6 is a nifty operating system that is essentially a reimplementation of Sixth Edition Unix that, unlike most of the huge montholithic Linux or BSD distributions that you'd run on your workstation or server, is simple enough to be used as a learning tool. Though xv6 lacks in functionality that you'd expect from a modern operating system, much of the core unix concepts and structure remain the same. xv6 is also very lightweight, only taking a few seconds to compile and allows remote debugging. This all makes it great for understanding how modern operating systems hang together.

In fact, xv6 was developed by MIT as a teaching operating system for their 6.828 course. The course page for 6.828 is a great resource that MIT are kind enough to have publicly avaliable.

MIT also produce a fantastic xv6 reference book that provides commentary on the structure of the xv6 operating system. Additionally, the xv6 source actually self documents - the xv6 make file contains a target (make xv6.pdf) that generates a pdf of the source code, which amazingly comes in under 100 pages and 10k lines of source (including comments!). Not bad for an entire, functional, operating system.

xv6 is typically run virtualized using qemu on a Linux host machine. To get started with xv6, clone the xv6 repo:

Then to start it as a virtual machine under qemu:

If make fails, make sure you have your compiler toolchain installed. There's some good info on the 6.282 tools page. For me, on Fedora, I needed to install gcc with dnf install gcc.

Once you have your compiler toolchain working, qemu will pop up and you'll be presented with the xv6 shell. 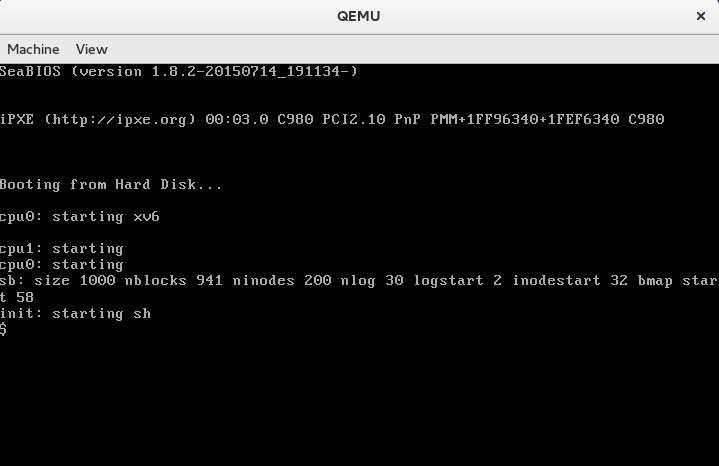 From here, you'll be able to run a few simple commands like ls and cat and revel in the knowledge that you can understand what's happening behind the covers by reading through the source code for the shell - line 8500 in the source code listing.

The core while loop the shell executes is shown below.

This loop gets a command from a user, checks if it's the cd command and attempts to change directory if it is, otherwise it forks, and runs the entered command in the child process. I personally love how simple and enjoyable the code is to read - check out the rest of the listing for sh.c in the xv6 source code pdf - it's only 400 lines of code and a delight to read.

This was only a brief peek and excitement builder for xv6 - there's so many other facets that are worth having a deeper dive into. Join next time when I'll step through and explore the xv6 bootstrap sequence!